Click on blue words below.  Gayle Kerr, a spiritual director and supervisor in our Gateways to God program, gently guides us through the 3 phases of Lectio Divina using God’s promises in Isaiah 43.  Though it can be hard to see, God is doing a new thing and lectio divina will help us discover it.

It was a very peaceful and prayerful service.  Social distancing and masks. 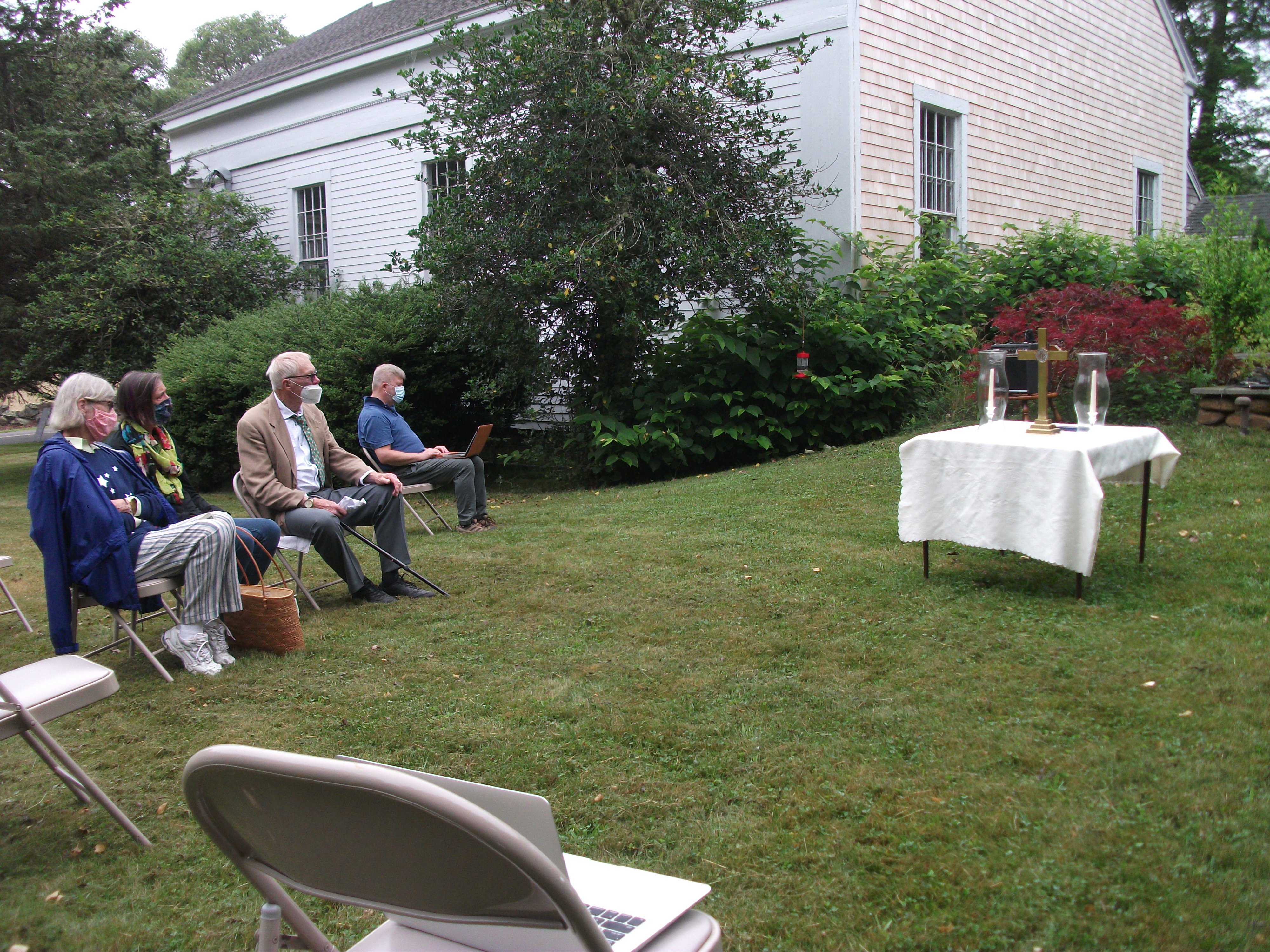 George and family sat together.  It was great to see each other and those at home on zoom. 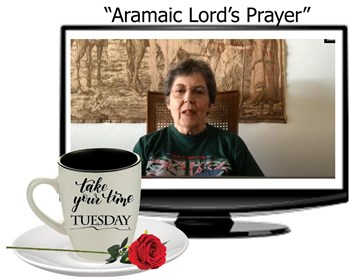 In this week’s Take Your Time Tuesday video, Douglas Koch leads a chant with singing bowls of the first word of the Lord’s Prayer, “Abwoon,” followed by Jean Chandler explaining the fullness of the meaning of “Abwoon.”

The very day I am starting to write this little note, my wife and I were scheduled to fly to the States, ride the bus to Woods Hole, and hopefully catch the last ferry for our yearly six-week visit to the Vineyard. Somehow, this fact has brought us to reminisce about the many experiences there, over 40 years’ worth in my case, a lifetime’s in hers. One has stayed on our minds as particularly meaningful, and as one that paradigmatically defines for us the people of Chilmark. Over the years we have come to appreciate how kind and caring the local society is, and, as a remarkable feature, how lovingly they take care of their elders.

In 1947 my wife’s grandparents bought a property in Chilmark. It included a “quaint little house” (as it is identified in “Martha’s Vineyard — A Short History,” edited by Eleanor Ransom Mayhew) that, to my city-boy’s amazement, had been moved twice before being “deposited” in its beautiful present location, on a little grassy knoll within earshot of Fulling Mill Brook. By the early ’80s, my parents-in-law had taken up full-time residence there. My wife and I, with our two young children, would strive to visit them once a year, usually in December.

Both our daughter and our son had grown particularly fond of spending the Christmas season on the Island. Grandparents’ doting, carols, a beautifully decorated fir tree with tons of colorfully wrapped toys left by Santa under it, and more often than not, snow on which to sled, build snowmen, and have snowball fights were just some of the highlights that did not exist back home, at least not with the same intensity.

My mother, a recent widow, then in her early 80s, had come along with our family of four for the 1990 visit, and was also staying with my in-laws. She spoke no English, but was having a grand time with her extended family. It was not her first visit, and she had already grown very fond of the Island.

In the wee hours of one morning, we heard her talking incoherently in her bed. She was very agitated, and could not generate any meaningful sounds. We immediately called the emergency number, from a rotary-dial phone that is still being used in the house today. In retrospect, it seems that the ambulance arrived even before we hung up the phone. Some of our acquaintances were among the crew, but there was no time for platitudes. They quickly reached the correct diagnosis (diabetic coma), and immediately took the appropriate steps. They saved her life.

She was taken to the M.V. Hospital, where she was in critical condition.

So far this story, while remarkable, is not terribly unusual. EMT volunteers routinely save a lot of lives. What happened next is what lingers in my memory as characteristic and defining of Chilmarkers. The following Sunday, at the proposal of one of the volunteers who had come to the house as part of the ambulance crew, the congregation of the Chilmark Community Church offered a prayer for her recovery, for someone they hardly knew. The following day, Arlene Bodge, Chilmark’s pastor at that time, and some members of her congregation went to the hospital to visit my mother, brought her flowers, and spent quite a while chatting with her — who knows in what language. Also, starting the very same day she was taken to the hospital, several friends, and some other people that we hardly knew, kept coming by the house and calling by telephone, offering to help in any way they could.

For many years, my mother kept coming back to Chilmark with us, and she enjoyed every minute of it.

My mother lived to be 100, and, in spite of some of the usual short-term memory problems of advanced age, she remembered this little story all her life. I still do.

This is beautiful music.  Recommend.

“Before I formed you in the womb, I knew you; Before you were born, I sanctified you;
I ordained you a prophet to the nations.” Jeremiah 1:5 (N KJV)

As this new day unfolds, I want to pause and thank you for all the mothers of this world; the memories of our mothers, the faithful mothers of the present, and the mothers of the future. I pray that you remind mothers who have given birth and those who have raised children they did not birth that you are always with them.

During these challenging times of physical distancing and uncertainty, let us not forget the many scarifies our mothers have made over the years. Let our mothers persevere and not give up because their current situation seems bleak. Grant the mothers of the world the courage and strength to keep on climbing as encouraged in this poem by Langston Hughes,

Well, son, I’ll tell you:
Life for me ain’t been no crystal stair.
It’s had tacks in it,
And splinters,
And boards torn up,
And places with no carpet on the floor—
Bare.
But all the time
I’se been a-climbin’ on,
And reachin’ landin’s,
And turnin’ corners,
And sometimes goin’ in the dark
Where there ain’t been no light.
So boy, don’t you turn back.
Don’t you set down on the steps
’Cause you finds it’s kinder hard.
Don’t you fall now—
For I’se still goin’, honey,
I’se still climbin’,
And life for me ain’t been no crystal stair.

Thank you, God, for our mothers; thank you for their strength of character and their love for you. Bless them with long life and satisfy them with the desires of their hearts and they diligently seek after you.

connects to a meditation on Embodied Gratefulness.